The Stadtschrift Association is opening its second “Mauerschau” bringing long dismantled, individually designed lettering back into public space.
This article first appeared in the online magazine of the Wien Museum.

The typographic DNA of the city

Television, photo-house, restaurant: Not only the design of the lettering itself, but also the offers they once advertised seem strangely antiquated today. But neither nostalgia nor the longing for the “good old days” are the driving force behind the Stadtschrift association, which collects these Viennese lettering, conserves them and brings them back into the public domain.

It is the concern about the dwindling individuality of cities, the lack of aesthetic sensibility and the drastically reduced quality of visual communication in today’s cityscape. With the advent of international chains and their uniform coding and the simultaneous dominance of cheap stickers as the technical implementation of choice, the demand for individuality, for expressive typography, even for the durability of business portals has rapidly declined.
Mounting the signs, © Stephan Doleschal

This is regrettable in so far as business portals contribute significantly to the flair of a city or district. In Vienna, compared to other cities, many shop signage from the 50s and 60s were preserved for quite a long time, but especially in the last years, there were massive waves of closures. In the past, company signs were all too often simply disposed of, but today they are sought-after collector’s items.
In 2012, the Stadtschrift association began documenting historical Viennese business lettering and saving it from being scrapped. From the beginning, the idea was to bring the signs back into the public space. In September 2014 the first wall exhibition finally opened in the small Sperlgasse in the 2nd district, but had to be taken down again in autumn 2018.

Meanwhile, in many cities, there are initiatives that deal with the preservation, collection or at least the documentation of local inscriptions. You can find the lettering in books and online, or admire it in museums, such as the Neon Muzeum in Warsaw, the Berlin Museum of Letters or the American Sign Museum. However, no matter how lovingly these exhibitions are done, there is always a little wistfulness when the typefaces “wander into the museum”. For these lettering were created for installation above eye level, and they only develop their full effect on the façade.
The Viennese approach of giving the lettering a “second life” in public space corresponds to its essence. High up on the fire walls, the writings are decentrally accessible to all. Everyone who passes by can perceive them – or not.

Just like in their “first life” at the business portals. Passers-by who pass them daily will probably not even notice them after a while. Just as they did not notice the lettering of that “small shop around the corner” – until one day it was closed forever. 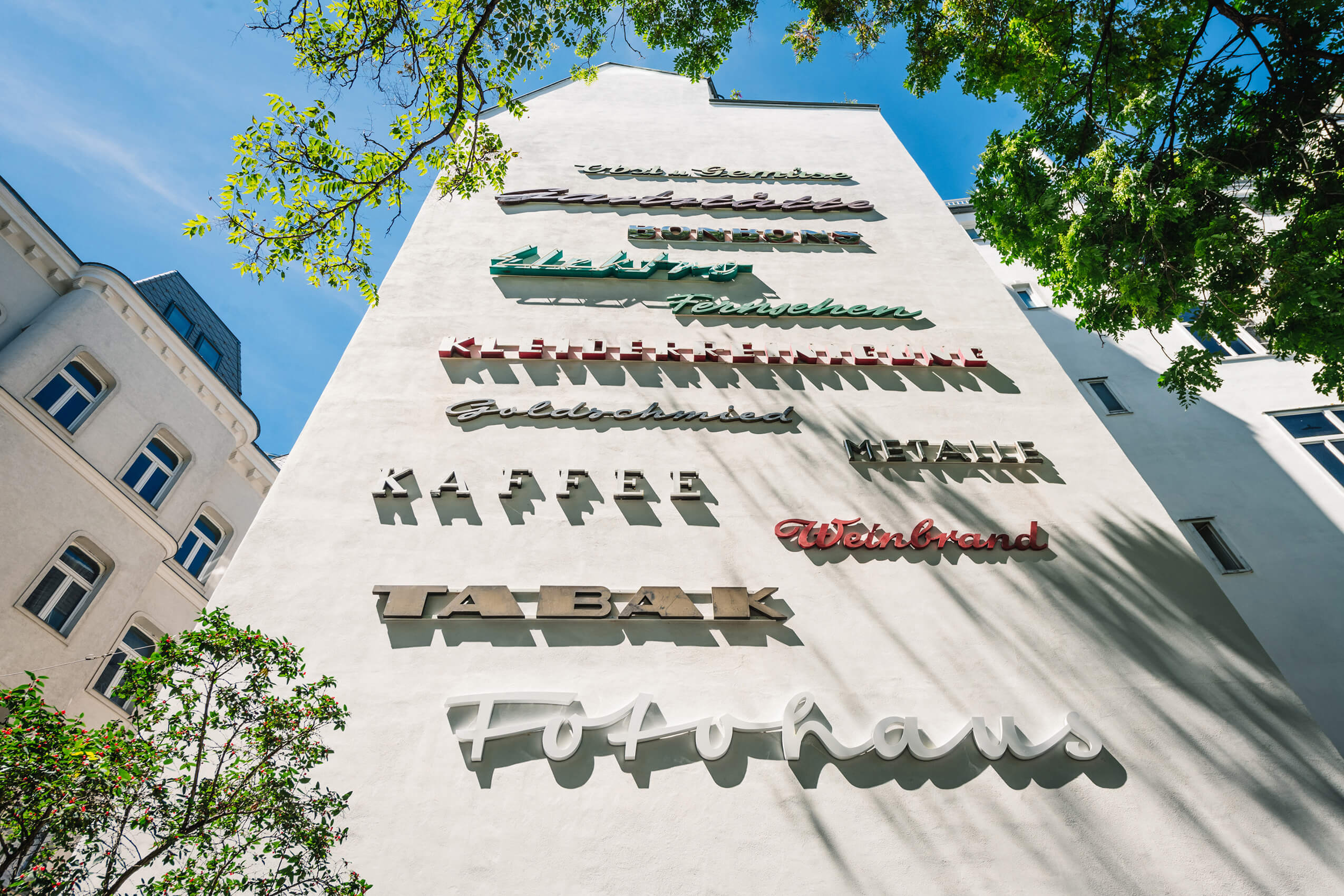 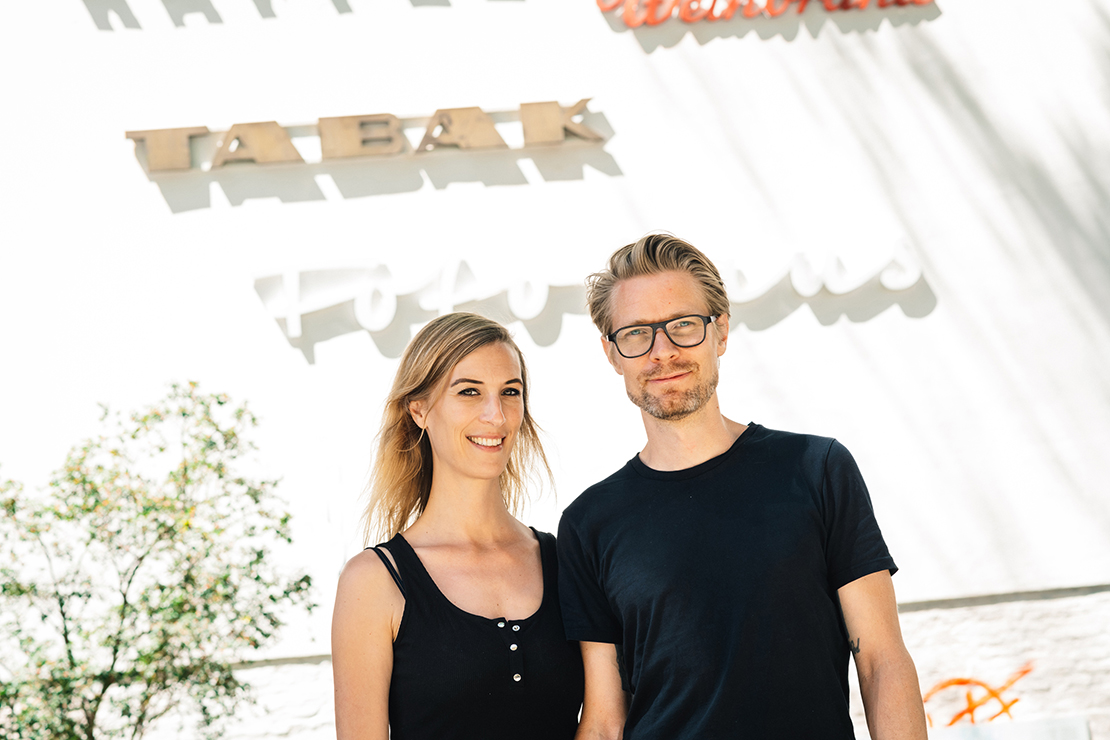 Birgit Ecker and Roland Hörmann are the people behind the Stadtschrift association. They describe their work as quite labour-intensive: following up tips on closures, negotiating with property managers, finding sponsors and getting the signs fit for the wall are just some of the activities that precede a wall exhibition. In the case of Ludwig-Hirsch-Platz, a good one and a half years passed from the first meeting to the installation.

Ecker and Hörman don’t run out of ideas, nor do they run out of letters. In September 2018, the two brought a total of ten female names in the form of lettering on the “female name wall” at the corner of Hofmühlgasse and Mollardgasse with “Lieselott”, “Mona” and “Gitti”. They are currently working on an exhibition in cooperation with the GB*Stadtteilbüro in the 15th district of Vienna.
In a few weeks’ time, writings from the districts 6, 12, 14 and 15 will be on display on the premises of the GB*Stadtteilbüro. Roland mentioned a special project in our conversation: After the women’s names in the 6th district and abstract terms in the Carmelite Quarter, it would be great to dedicate a wall to the well known Viennese trade names such as Slama, Osei & Co.

In any case, there would be enough lettering for such a wall. 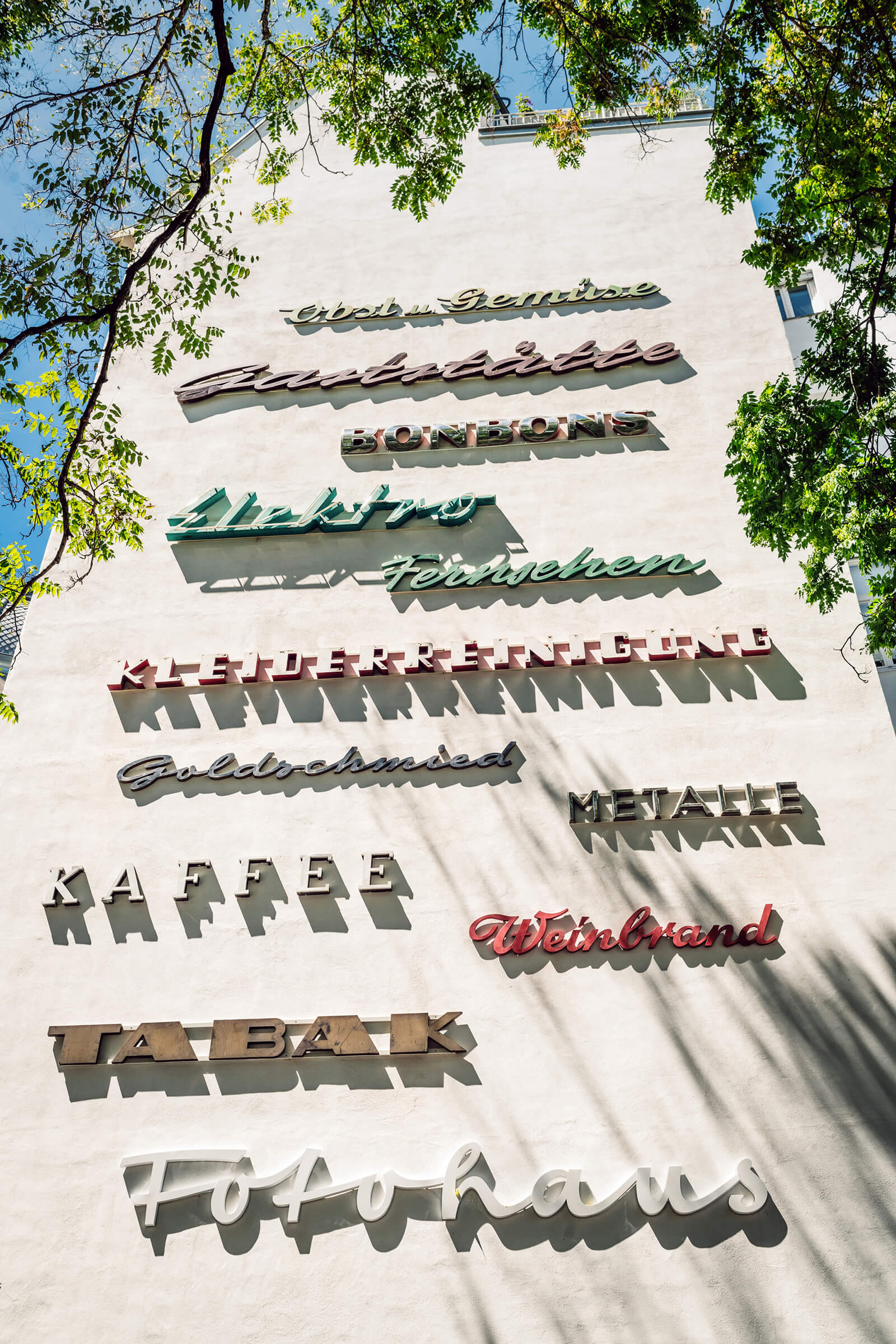 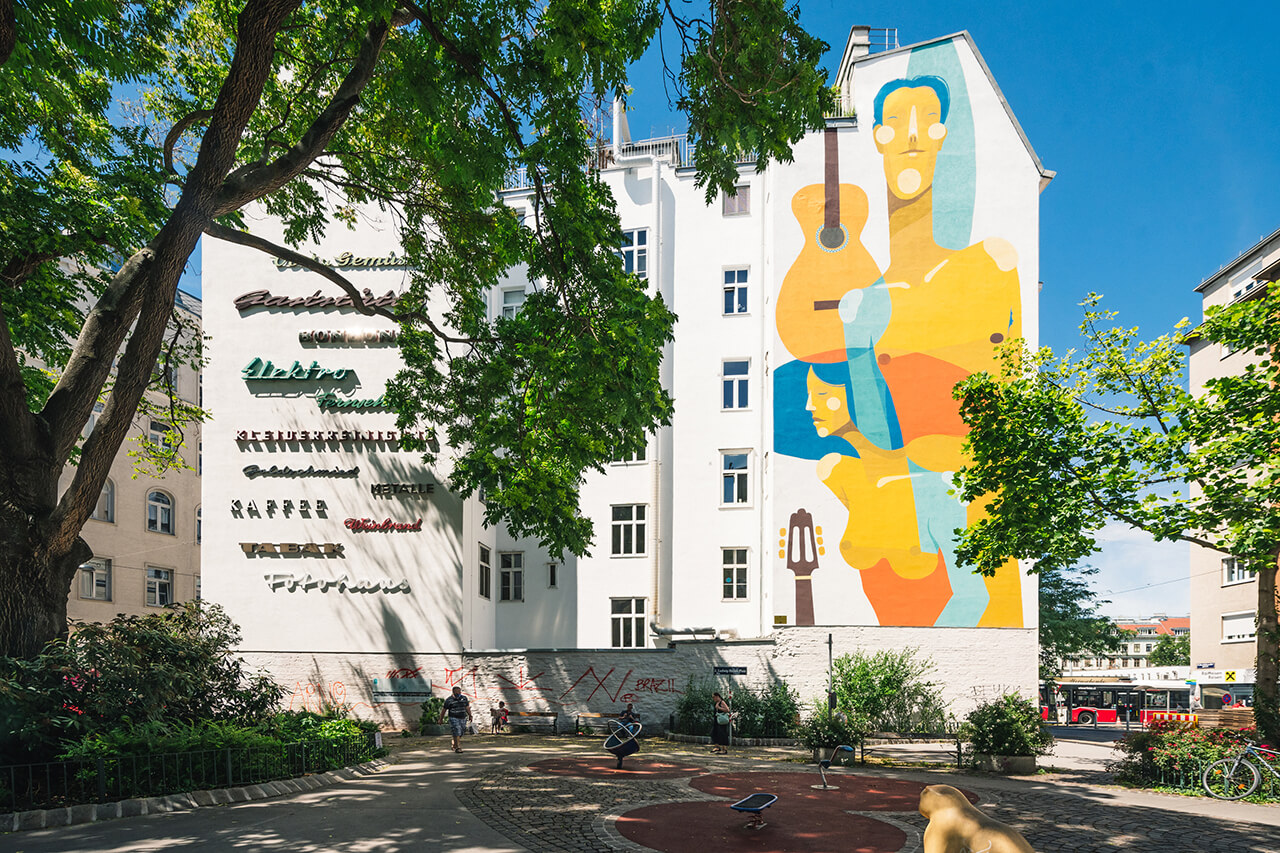 The stories behind the facades

The two describe the reconstruction of the history of the lettering and the associated businesses as a further, equally exciting aspect of their work. The typefaces often bear witness to family businesses that offered their goods and services for generations.
Many of them were institutions in their neighbourhood, for others one travelled all over Vienna because of the special offer. A panel on the wall provides information about the shops and their history and shows the lettering in its original surroundings. Here is an excerpt: 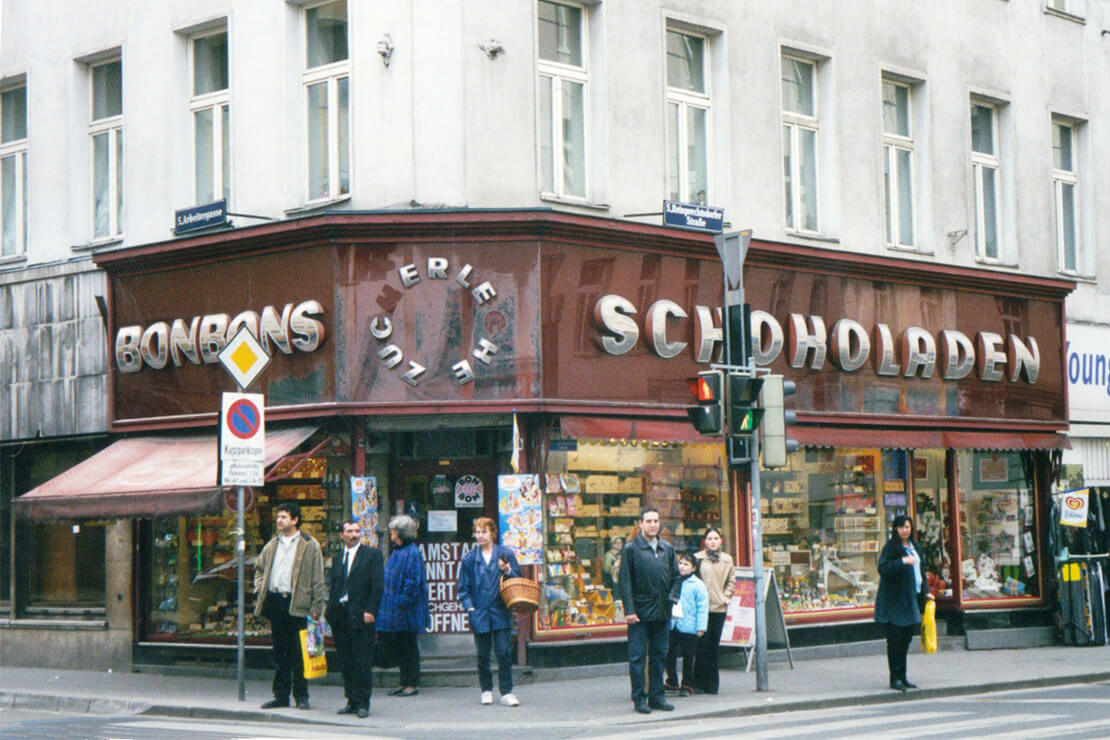 
The shop windows lavishly decorated, the smell when opening the door unforgettable: Candy stores were the ultimate childhood dream and often tactically cleverly located in the vicinity of cinemas or theatres. The Zuckerlecke no longer exists since 2005. By the time it closed, the “chocolate” was already incomplete, because letters on glass panels were not drilled but glued – which may last surprisingly long, but not forever. The lettering was probably produced by the company Körner & Kloss (1897-2002), which had a patent on this type of mirrored and cambered letters until the 1950s. In a handful of originally preserved candy shops, one can still embark on sweet time travel in Vienna.


The “Elektro Heyhall” was one of the first font rescues of the association Stadtschrift and had already been shining for four years at their first wall exhibition. The futuristic lettering installed by the Ronovsky company in 1964, especially the lightning “E”, is a typographic homage to electrification. The neon installation was maintained by the employees themselves. Until the mid-1980s it was open six days a week, after that the premises were used as a warehouse. The company still exists to this day. 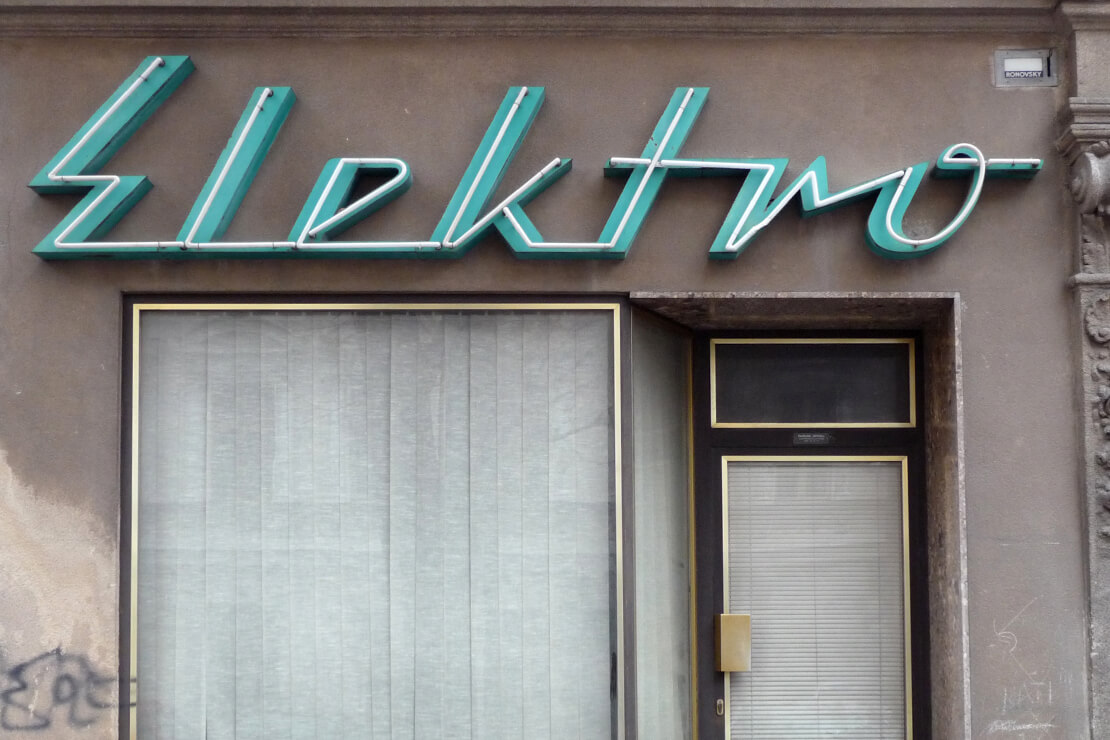 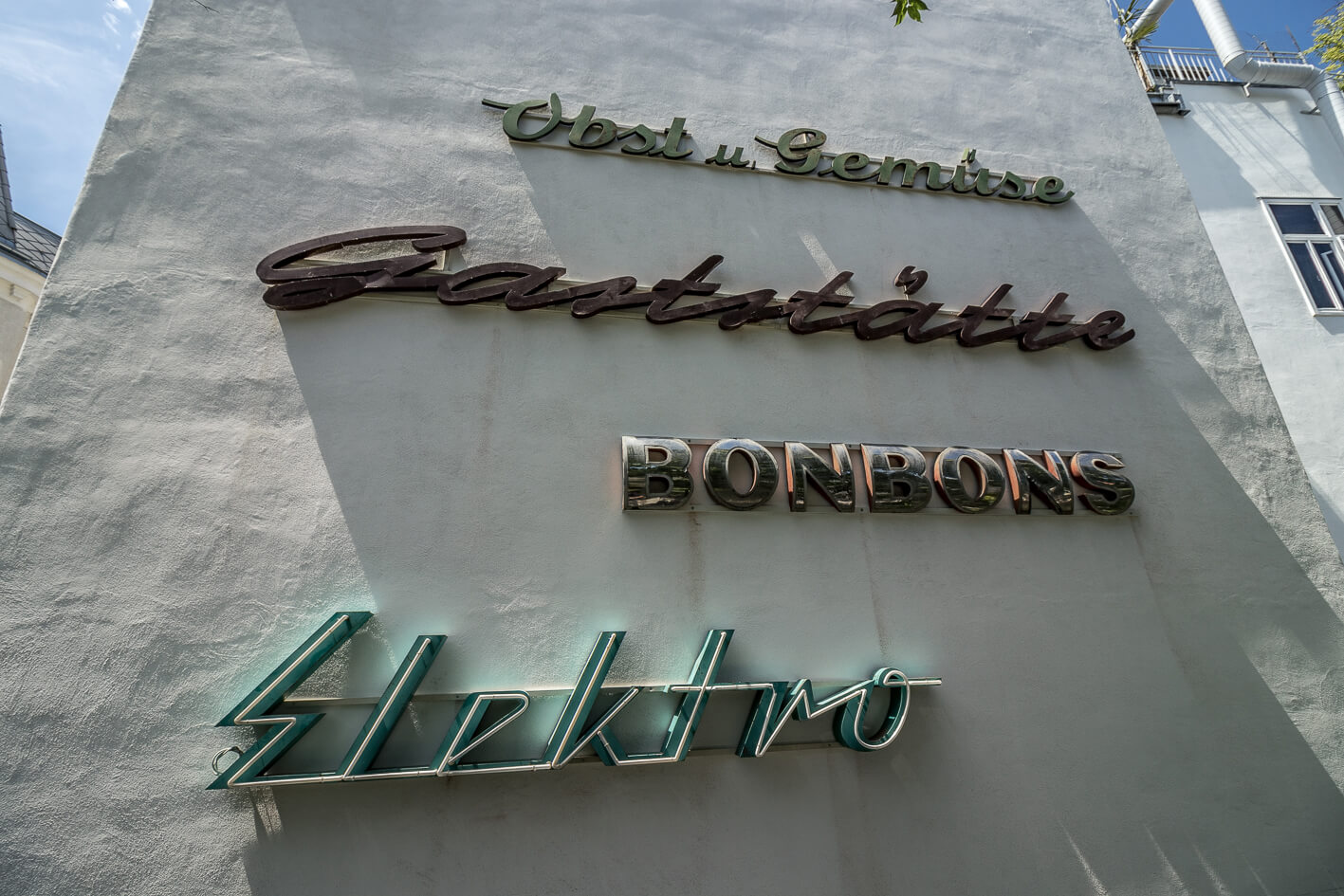 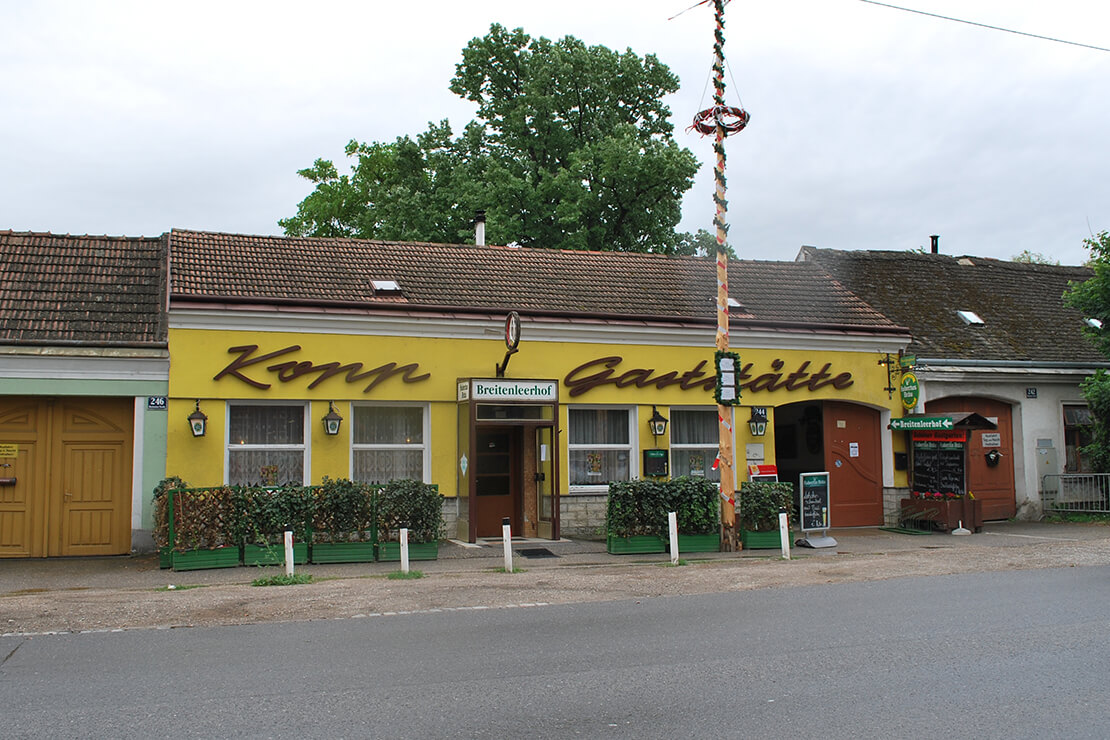 
In the last few years, several traditional taverns in Vienna had to close, so that the district newspaper spoke of a “dying out of taverns”. Another affected pub was the “Gaststätte Kopp”, since 1997 better known as “Breitenleerhof”. The elongated area of the inn, which has existed since the 1880s, was purchased by the housing association for private employees in 2013. Rental apartments were built on the property in several parts, the existing beautiful ballroom was preserved. Efforts were made to reinstall the original lettering after the reconstruction, but due to its wide extension no suitable location could be found. A characteristic feature of this lettering is its yielding baseline – it seems to evade the archway at the end of the word.


When Hubert Horky took over the café from his mother in 1964, the location already looked back on a long tradition. The mockery of its owner and the furniture, which remained unchanged until the end, made Kaffee Urania one of the most unique places in town. In January 2016 it was closed, a little later Horky died. The signage, with neon tubes on the entrance side and unlit letters around the corner, dates from 1964. The second part of the design, the Muse Urania, has its home on the “female name wall” in the Hofmühlgasse in the 6th district.

The “female name wall” in the 6th district with the second part of the inscription of the Café Urania, © Klaus Pichler 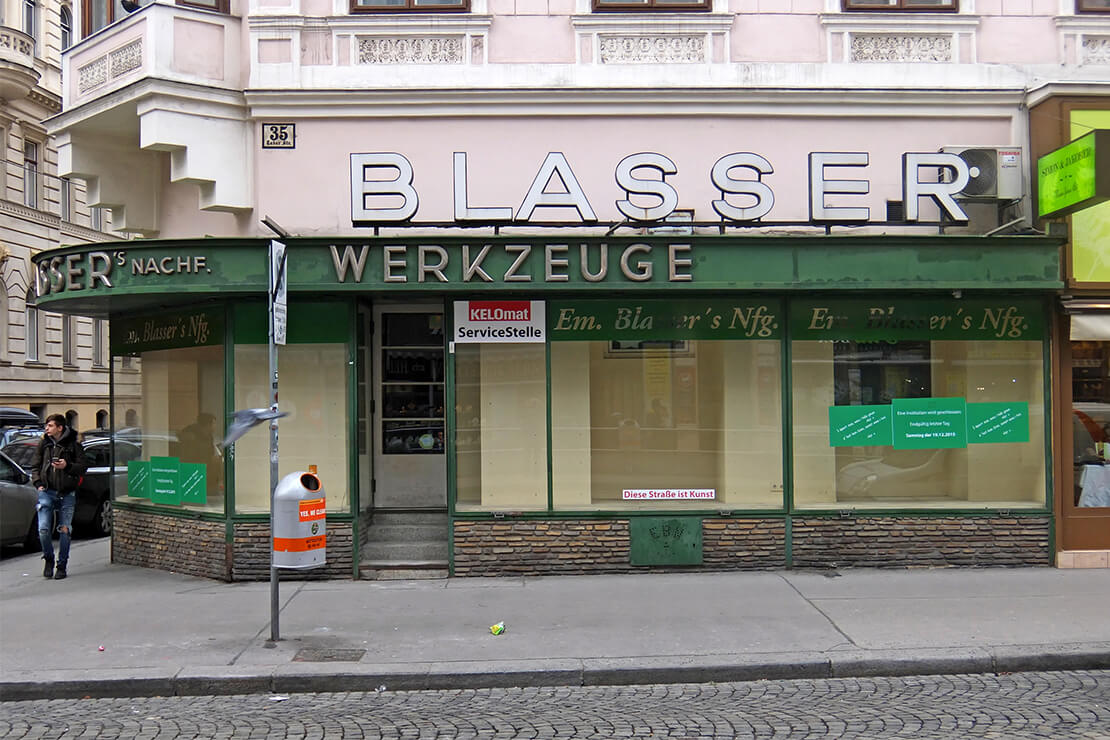 
This inscription comes from the immediate vicinity of the wall exhibition. The business, founded in 1836, had three main pillars: Towards Tabor Street you could buy hardware, screws and nails by the piece. In Große Pfarrgasse was the department for household goods with exotic items such as honey dispensers and electric bread knives. Those who wanted to have their pressure cooker checked for safety were in the right place at Blasser’s KELOmat service point. In addition, “Blasser” was also a veteran of the Austrian water sports market. Boat fittings, lines and ropes were available opposite in the Große Pfarrgasse. Already in 1905 Ernst Bathelt appeared as Emmerich Blasser’s successor. The chrome letters could also date from this time. At the end of the 1970s Ing. Peter Hahn took over the business. The last owner was Herbert Felfernigg from 2004 on, a proud, traditional shopkeeper.

Information about the projects: www.stadtschrift.at